Well, my return to the club was easier than I thought. It was good to see all the people that I hadn't seen for a few years. When I arrived, the room was full of people chatting and the table was weighed down with models. 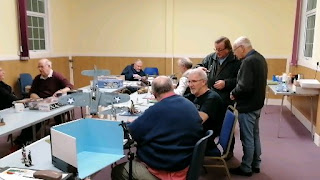 After the usual opening messages, Colin got the meeting off to a good start by describing the background to the Airfix 1:72nd Avro Lancaster he had brought along. It was a strange beast - a BIII converted to an M.R.3. from the School of Maritime Reconnaissance in mid-1956.

With Eduard cockpit details and Avro Lincoln wheels it was a clever conversion. Oh, also, he had to scratch build all the aerials.

Up next was a nice pair of Airfix 1:72nd scale MiG-17. The box includes decals for a Russian version and an unusual North Vietnamese, supposedly flown by one of their aces. Peter Terry comments that each one was a straightforward build. 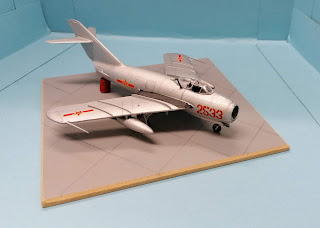 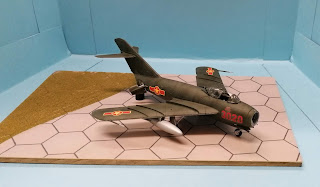 Built out of the box, it was surprising to see an oil drum supporting the tail of each aircraft. It seems that, when full with fuel, a MiG-17 could tip backwards so the wily crews put an oil drum under the tail to stop this happening. Peter built these out of the box but gave some recommendations about the paining. He always uses Tamiya paint but he has a tip - with a new bottle, open it and pour a little Tamiya thinners in. Give it a good shake and there is - a bottle of airbrush ready paint - simples. The Russian plane was painted black before its coat of silver. Peter pointed out that this gives a better finish for silver paint.

In an attempt to take over the whole table - smile - John Ovenden provided us with a 1:18th scale Merit Douglas Dauntless and a 1:32 scale Hobby Boss B-24 Consolidated Liberator.  How he has room for these, I will never know although he did say that the Liberator had no undercarriage as it was destined for the ceiling. He brought along a nice "little" 1:48th scale Italeri (Ex- Accurate Miniatures) Dauntless for comparison. 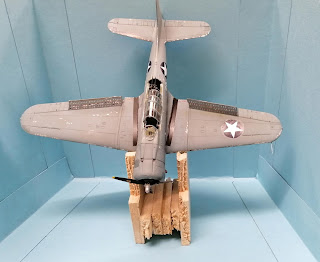 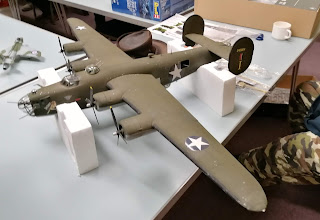 It was nice to see someone else bringing some figures along. Martin Hogben had two lovely Japanese Samurai from Bonaparte Models.on display. Resin kits, one was 1:10th scale but the other was considerably larger. Unfortunately, I appear to have lost my photo of the larger one but here is the second - something to be proud of. 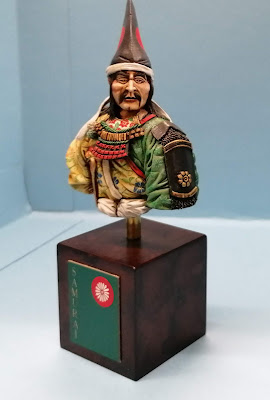 I hadn't chatted with Bill Banks for a couple of years but it was nice to see that he is still working his way through the Airfix 1:72 scale catalogue. This time, he showed us a Hawker Typhoon as seen in France after D-Day. 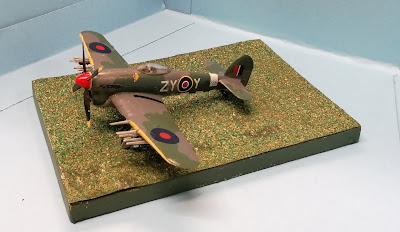 He had a humorous tale to tell about the D-Day stripes. It seems that he carefully painted the stripes on the underneath of the aircraft (note to self - take more than one photo, otherwise you miss some detail). Having struggled with this, he found that there was a perfectly OK set of decals in the box! Bill says, "never mind, mine are a bit uneven - but they would have been in real life!". I have made this kit and I know how good it is.

Peter Carlo is a committed armour modeller (or targets as most aircraft modellers call them). This time he had a fabulous pair of US vehicles from the Afghanistan operations earlier in the century. These were a Buffalo 6x6 Mine Clearer JERRV and a Cougar 6x6 MRAP. These are from Panda in 1:35th scale. They were very clean with lots of fine details. Peter had been in Afghanistan and had talked to crews of these vehicles including seeing the benefit of the slat grill armour. He found a crew that had just been hit with two missiles but both had dissipated because of this addition. 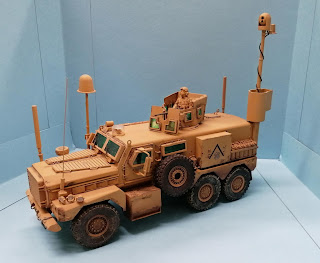 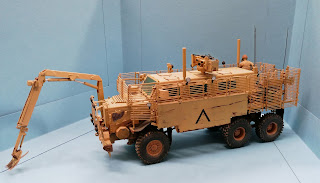 Wikipedia says "The Buffalo combines ballistic and blast protection with infrared technology to detect the presence of dangerous ordnance and a robotic arm to disable the explosive ordnance. Personnel operate the Buffalo’s 30-foot robotic arm and claw from within the armoured hull via a mounted camera and sensory equipment, to safely dispose of mines and IEDs."

Breaking his normal pattern, he also brought along two aircraft - a Gloster Meteor and a Hawker Hunter. Both of these were Airfix 1:48th offerings built out of the box. I liked the underneath of the Hunter so, fingers included, I added a shot. 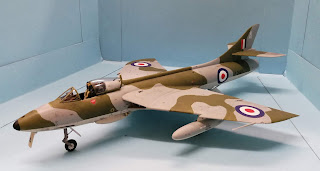 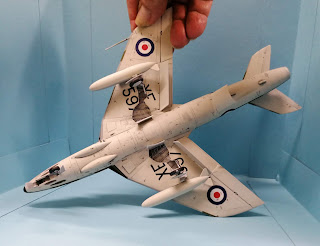 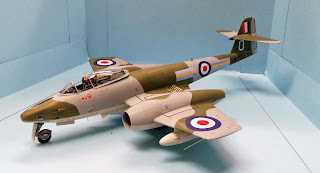 Crispen was still at his usual business of continuing a build whilst the meeting went on. This time, he is building a 1:16th Trumpeter SU-100. Best of luck! I forget to take a picture - sorry Crispen.

John Rose came in with his usual arm full. First of was a completed Fieseler Storch. There was a discussion about which kit but it turned out to be by HobbyBoss - which may make it originally to be a TriStar model. In spite of its seeming fragility, John demonstrated how the undercarriage can be stressed with no ill affects. 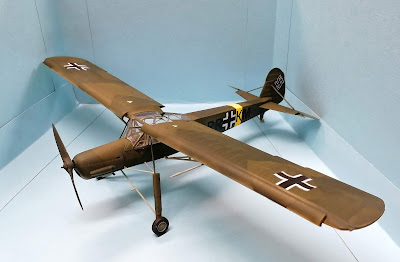 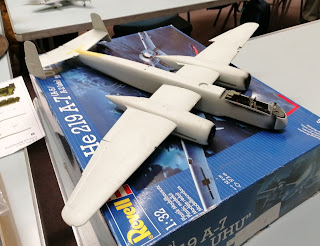 Jim Smetherham is working on a 1:32nd Dragon P.51K Mustang. So far, he has built the engine, which he found fiddly. Unfortunately, I didn't get a shot of this but here is the box. 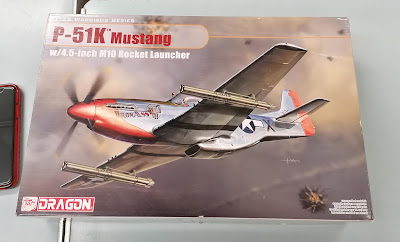 Because of his grandson's interest in Star Wars, he has also got hold of this kit - to be completed later. 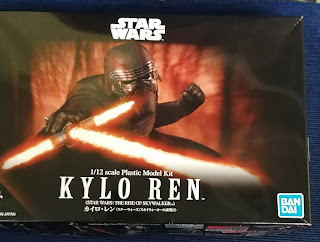 I have no idea what it is about or what is in the box. Let's hope we find out sometime.

I thought that Jeff Adams had brought along an entry for the Colchester club land sea and air competition but, in fact, it was land, land and air! Instead of his usual Sherman, he brought along a nice piece of WIP - a Tamiya French Char B. He commented that he is getting very enthusiastic over Mr. Surfacer for getting an even finish across the different materials involved. 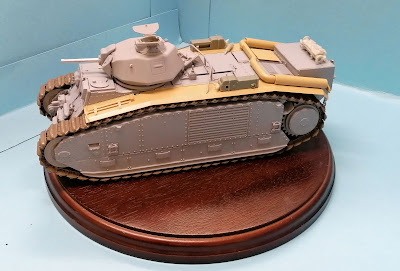 His second "land" model was of a Volkssturm cyclist with a couple of panzerfausts which are mounted on the front forks. Evidently, there are lots of little decals for the panzerfausts - instructions to any untrained person who has one when near a Russian tank!. 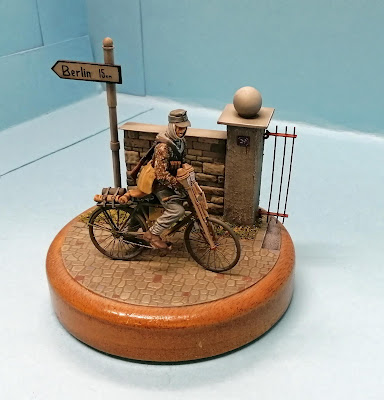 The fiddly bit was the etched brass spokes. Evidently, Jeff has seen one of the bikes in the "Battle of the Bulge" museum in Luxembourg. Tongue in cheek, I asked if the full size bike had brass spokes! I have been to Luxembourg on many occasions but, as I was on business each time, I never got to see any museums - shame.

Just for once, Jeff indulged in a bout of aircraft modelling. It seems that he has made a bf109 G2 before and explained that the G4 that he brought along differed only in the radio and the aerials. It seems that the factory stopped giving new IDs to every variant but just changed the digit for small changes. 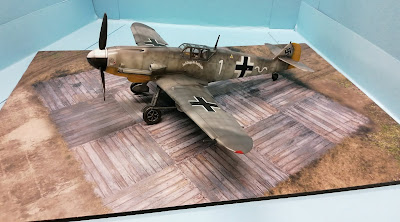 The base is a photo of an actual Luftwaffe hard standing that has been printed onto sheet plastic. Unfortunately I did't get the makers name but it was very nice.

Having one strange Lancaster on the table is unusual. This time, however, we had two because Arthur brought along a beast that is even stranger than Colin's offering. Arthur brought us a Lancaster BIII which had been heavily converted for use by the Empire Air Navigation School. The aircraft was used to determine the long over-water navigation techniques for the Tiger Force air assault by the RAF on the Japanese mainland but the war ended before this came into operation. 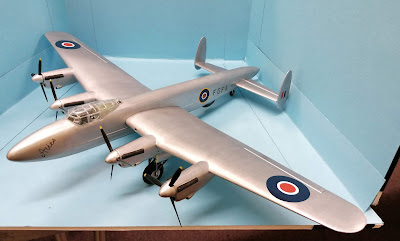 The model uses an Airfix 1:72nd scale Lancaster (first moulding so quite new then!) with an M&E Models Lancastrian conversion kit. As ever, when Arthur cuts and shuts you can never see the join! Having had issues with the name 'Aries' on the nose, Arthur eventually wrote it on himself using a fine felt tip!

Lastly, there are my three contributions to the table. These are all Scale75 75mm figurines. Two are in resin and one is metal. You can really feel the difference when you pick them up. However, there is no visual difference once they are painted. If you are interested, it is the Imperial Guardsman that is made of metal. 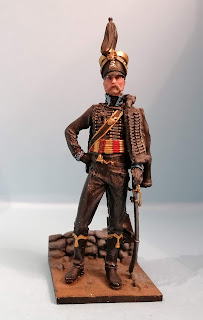 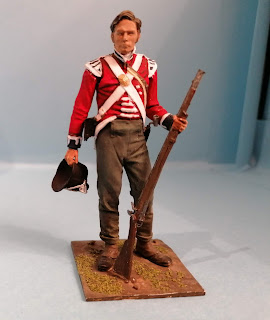 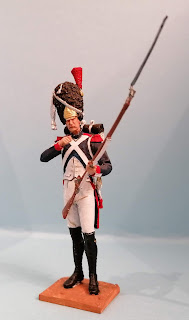 I wanted to bring my little turntable along to highlight one of the models on the table. Unfortunately, I couldn't find it in time. It seems that it was away in our storage room. I have recovered it and have put together a little video to show what I wanted to do. I intend to bring it along to the club each month and use it to highlight one model - not the best, as we don't judge models at Clacton - just a random pick.


There is an option to see this in full screen mode so have a go!