January is always quiet and our meeting reflected that. There were just 6 of us around the table and only three of us had brought models. I usually avoid putting my model on the turntable for the "featured model"  but there was a tale of woe attached - of which more later.

Three of us had brought models for the table and the other three had all brought kits that they were planning to build.

Peter brought along a "heritage" Airfix kit in the shape of a Supermarine Spitfire Mk. IX in "French" airforce colours - actually RAF and Pierre Clostermann. 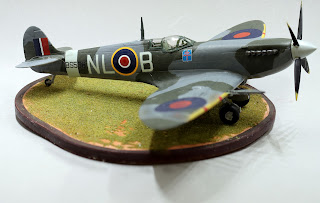 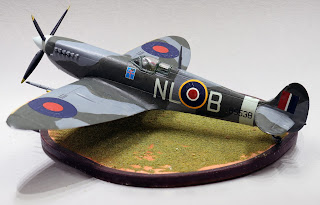 Peter showed us a huge model of a Douglas Skywarrior built from a Trumpeter kit in 1/48th. He says that he thought about converting it to a B-66 but it would have involved too much work. There are two perfectly formed jet engines buried inside the model. Peter says "at least I know that they are there!". It was a complicated kit with, as an example, over 30 parts to the cockpit alone. 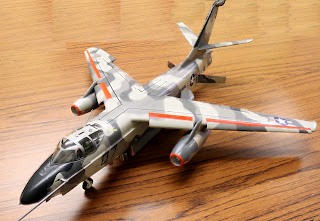 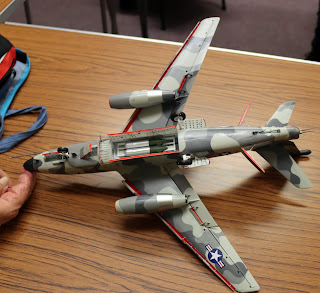 David brought along three 1/24th scale cars, one of which had been seen before.
Firstly, he brought along a pair of Ford GT40s. One was a Meng kit and one a Fujimi, both purporting to be the Ken Miles/Denny Hulme car from Le Mans 1966. The cars differ in quire a few ways, not the least in the height of the car, the shape of the back window and the colour of the orage/red stripes on the bonnet.
David explained the "mud" on the windows which wasn't mud at all but overspray coming from him spraying the grill on the rear end of the car and forgetting that it was a mesh so the paint all sprayed onto the inside of the windows! Oh well, another one for the bin! 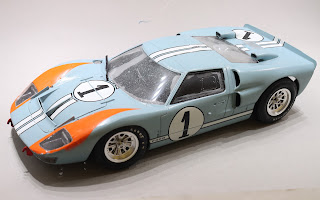 The other car he brought was a Tamiya 1/24th scale Mercedes AMG GT3 in custom Haribo colours. In 2016 HARIBO Racing Team entered the Mercedes-AMG GT3 "Haribo Racing, No.88" for the seventh race of the VLN long distance driving championship at the Nurburgring, ultimately finishing 2nd. The kit went together like all Tamiya kits. The one problem was that he tried using Zero Paints 2 pack varnish which, unfortunately, formed a lot of "pebbles" on the finish. He used 2,000 grit paper to get some of it off but it was too hard to shift. Finally, it was improved a little by a few coats of Gauzy Intermediate varnish. 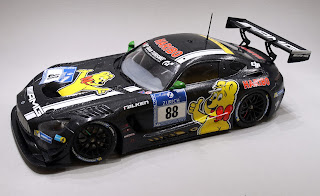 Crispen brought along some Tamiya kits to show us and explain that he was building a 1/16th scale diorama so needed these as models for him to make larger versions. 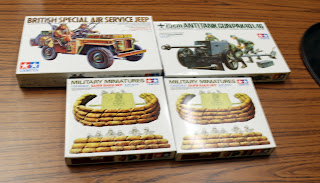 Andrew had made a visit to the model shop in Long Milford and purchased an unusual kit. This is  a 1/56th scale Rubicon Models Centurion Mk. 5 tank. Interestingly, this requires ABS (plumber's) glue as it is made from a different type of plastic. 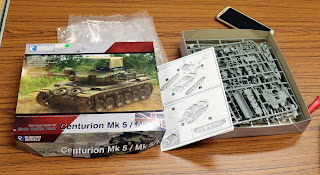 John also brought along a box rather than a model. This time it was a Das Werk Borgward IV PZJg. Wanze.  The Wanze was equipped with with six RPzB 54/1 anti-tank rockets. These rockets were also known as the Panzerschreck or in english tank fright or tank's bane. 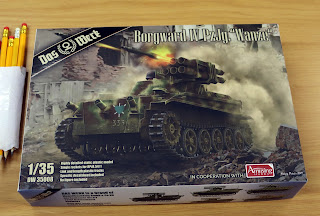 Well, that's it. Lets hope for a bigger turnout next month. Don't forget that you can click on the images to see larger versions.