I won't be blogging every social meeting as there is really only two things that happen - some of us do a little bit of modelling and everyone has a really good chat to everyone else. But, as this was the first one, I thought that it needed noting. Well here we go!

I managed to get a bit of a wave from most them.
Well that's it really. I brought along  a KP Spitfire, because Peter has been promoting these kits so earnestly. It's a nice little kit but is missing all of the attachment pins and slots that one gets used to with a Tamiya kit. Apart from that it is beautifully moulded. 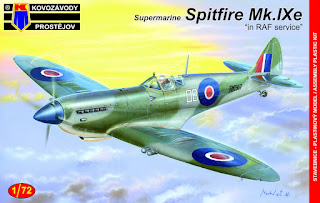 Well, the plan was good. However, there was so much conversation that this is as far as I got. 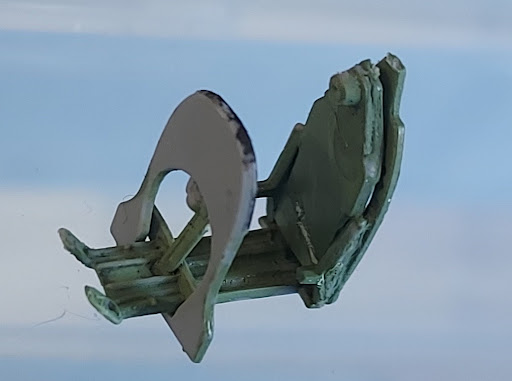 Never mind, it was a great evening. So much so that I left about 30 minutes later than normal!
Well, all that's left to do is to celebrate the evening with some snaps of the boys. Some smile and others - well, see for yourself! 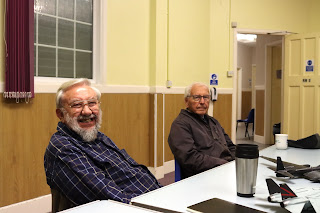 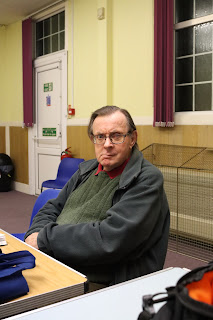 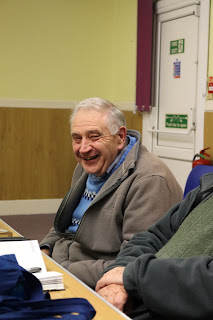 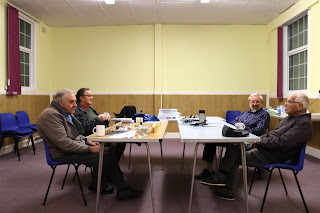 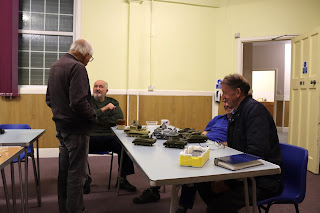 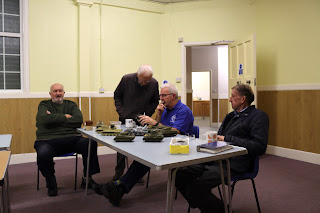 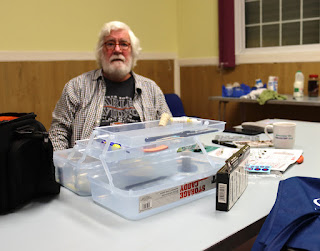 Well, this was the first meeting since this year where the journey both ways was in the dark. Winter draws on, as we used to say. A small group made it but there were a nice few models to show. First off, we have the feature video. I had better explain why you only see 1/72nd scale aircraft and up to 1/35th scale armour. This is because anything larger doesn't really fit either on the turntable or into the photo booth - sorry.

Now let's get down to the models on the table.

Bill brought along his finished Me 163B-1. This is a "centuries old" Airfix kit and Bill had a lot of fun investigating it and then making it. Bill says that "the aircraft portrays one from 2 AG Brandis. The airfields for these had to be under the Fortress flight paths  en-route to their targets as their flight time was only 12 minutes (up from 2 1/2 originally, then 5 minutes!).  There was a radio aerial but it continually fell off, with Bill finding it on the table top! 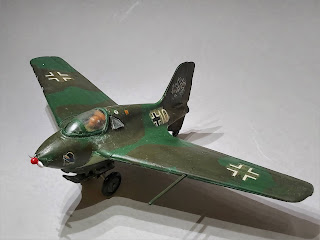 David had recently completed the new Meng 1/24th scale Ford GT40 representing one that competed in the 1966 Le Mans 24 hour race - and was the subject of the film Le Mans 1966 with Matt Damon and Christian Bale. He painted it up to be the car driven by Ken Miles and Denny Hulme. He brought along his Fujimi GT40 that was painted for Bruce McLaren and Chris Amon.  It was intended that Ken Miles should win the race but Bruce nabbed him at the line. In fact, even if Bruce had been behind at the finish, he would still have won because of the way that the race was started in those days - all lined up side by side at the edge of the track. Bruce's car being further down the track meant that he had travelled the longest distance.
We did a comparison between the old Fujimi kit and the new Meng and came to the conclusion that the Fujimi kit was the better one! Paint on the No. 1 car was by Zero Paints (Hiroboy.com). This is a lacquer based paint and sprays brilliantly. However, you can't hand paint with it so great care is needed. 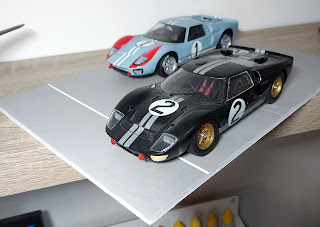 I think that, at long last, Gordon has been able to see his models on the web site as he, himself, doesn't have internet access. This time he brought along an Airfix Mitsubishi A6M Zero which had been very nicely painted. 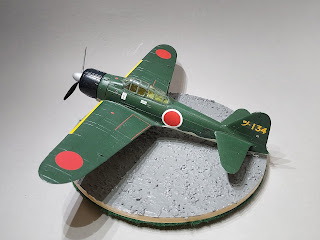 John brought along his usual suitcase of models. This time, we saw 7 different work in progress models. Two of interest were being built as a couple of Sherman M4A2 that were part of the Trinity tests in the Arizona desert on 1945. They were being used to ascertain damage etc. However, John only allowed me to photograph one of the models as he felt that too much W.I.P.  was not needed on the blog.
Anyway, I have one to show everyone. This is an ICM 1/35th scale BergPanther that has been converted to a what-if Flakvierling. 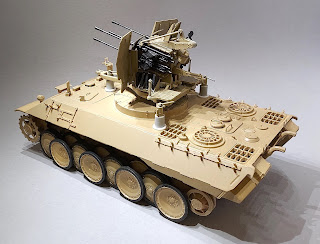 Pete brought along a couple of nicely finished 1/48th scale models. First up is a Revell Dassault Rafale 'C'.  Peter's comment is that is is a good kit with poor decals. It didn't need much filler and I am left with lots of spare parts! 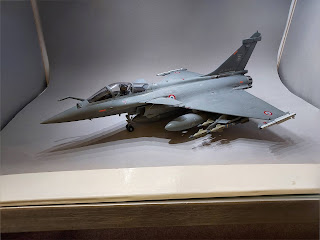 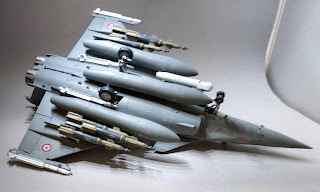 His second model is a Kinetic 1/48th scale Lockheed F-104G Luftwaffe 'Widow Maker'. As usual, with Kinetic, it is a nice kit but very firm fitting so take care. It needed no filler - goodness me, how often can you say that? 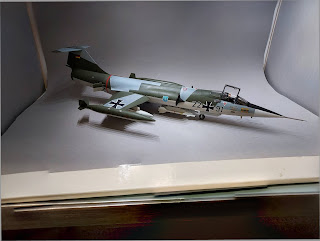 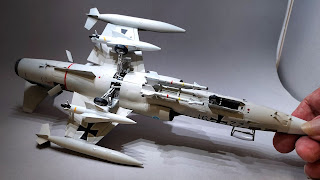 Peter, as is normal, brought along two very cleanly built 1/72nd scale WWII aircraft. The first is a Supermarine Spitfire Vc in desert camouflage. This is a KP kit. Peter really rates this manufacturer. 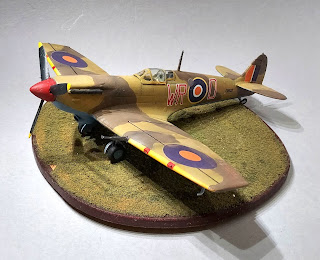 Note as in this picture, they even give you nice little decals for the built in recce cameras! A nice touch. 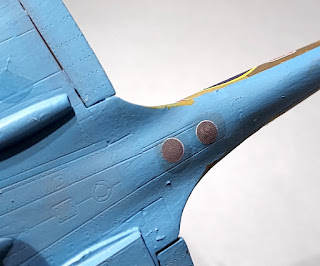 Secondly, Peter showed us a heavily weathered Hobby2000 kit (ex-Hasegawa) for a Douglas Dauntless SBD-5. Peter used some Print Scale decals for "3. SBD-5, 'White 51", NZ 5051, flown by F/Lt. J. W. Edwards & F/Sgt. L. A. Hoppe, No 25 Dove Bombing Squadron RNZAF, Piva, Bougainville, April-May 1944.". The interesting part of these is that the national insignia is repeated on both wings, both upper and lower. It is assumed that this is an attempt to stop their own flak and fighters from attacking them! 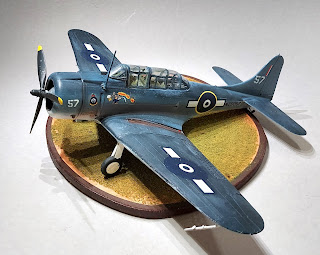 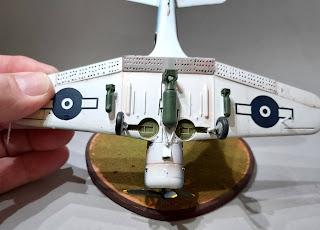 All in all, it was a good meeting. Peter handed out a list of dates for forthcoming meetings which I shall post of the club web site in the next week or so. Included are the dates for the "social" meetings. These are the 2nd meetings in each month where it is not expected to have a "let's go round the table" Rather, members will spend their time in social chit chat and. maybe, build a few models.  The next social evening is on 28th October so I shall see you all there.
at October 13, 2021 No comments: