Nine of us turned up for an open meeting. Nice to be without masks and distancing. In addition, there was a new person - too soon to call him a member, plus I didn't get his details so he won't be on the e-mail distro. Never mind, I will catch him next time.

I am pushing the blog out early because I am still having large issues with the web site and it doesn't seem that I will be able to put the model table up on the site any time soon.

It was nice to see Gordon Fisher turn up for the first time since lockdown. He always brings a nice little model with him. This time it was an Airfix P-51D Mustang. I always choose a model at random to feature in a little video. This time it was Gordon's turn.

First off, there was a discussion regarding the extra meeting that was proposed for each month. Both Peter Carlo and I asked why the dates Peter Terry had set weren't the third Thursday, as we expected.  He pointed out that he had little choice and had to accept the dates that the Brotherhood hall had available, so that was that! It will be interesting to see how this works out. I will try and come and bring something that I am working on. It will be good to have a bit more company over a month.

There were 11 models on the table.

As mentioned, Gordon brought along a very nicely finished Airfix 1:72nd scale P-51D Mustand on a little diorama base. 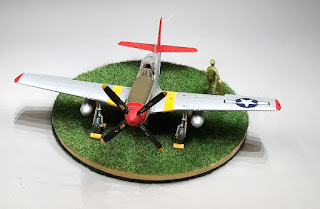 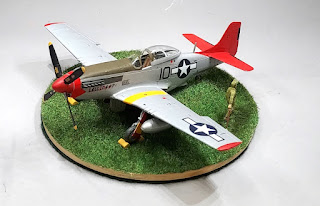 I realised, after making the video, that Gordon would never see it. Gordon does not have access to the internet. This has been the case ever since he joined the club. Given how important it is to my life, I can't imagine going through without it, but there we are.

I brought along my recently completed Airfix 1:72nd scale Bristol Beaufort. This is a recently produced kit that has an amazing 106 steps in the instructions. I found it to be a good kit to make. The undercarriage is very complex and is best left right until the end of the build. I chose the Dark Slate Grey and Extra Dark Sea Grey upper with black undersides.
I ended up with two big issues, both of my own making. First off, I had some difficulty putting the mid-frame turret together and managed to get glue all over the transparencies. I also found, after I had fitted the chin gunpoint, that I had blocked up the small aerial hole so removed the gunpoint. When I came to fit the aerial, it had gone to the carpet monster and, then, I found that the gunpoint had gone the same way. I have looked extensively but I haven't found either. Never mind, it doesn't notice until you pick the plane up and, once I put it in my cabinet, I shall never pick it up again! 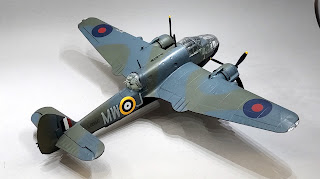 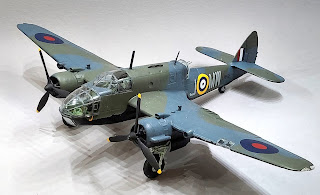 Jeff brought along two nice armour models. The first was a Tamiya 1:35th SdKfz222 armoured car. Jeff says "I built this 30 years ago but repainted it recently with my new Sparmax airbrush to get some practice with 'whitewash' fading". It seems that he did a great job. (Click on the image to see a bigger version and then blow it up to see how great the finish is). 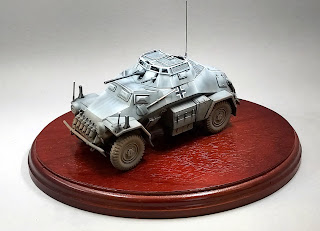 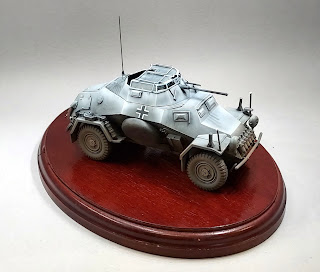 Jeff's second model was a HobbyBoss 1:35th scale King Tiger (Henschel turret version). This was built out of the box and still needs some detailing and painting to complete it. 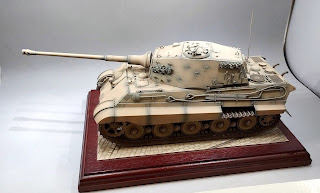 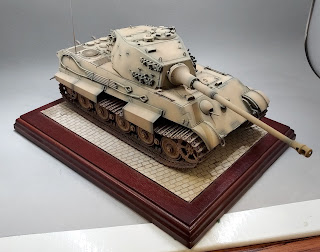 Another determined military modeller, John showed us an unusual subject - a 1:35th scale Revell Fordson W.O.T.6 3 ton lorry. John said that it was an easy build apart from choosing to make the canvas cover out of kitchen roll. He had a lot of trouble getting rid of the pattern on the paper. Anyway, it looks really authentic so well done John. 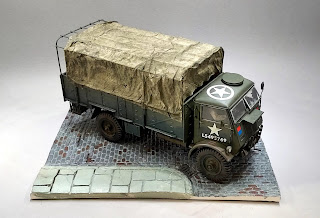 John's second model on the table was Tamiya 1:35th scale Pz.Kpfw IV G.  This looks pretty good to me but, according to John, it is only part finished so we hope to see again sometime. 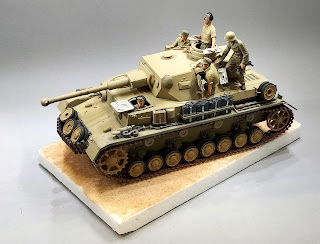 Peter brought along some more impressive 1:48th scale modern day aircraft. The first was a BAE Eurofighter Typhoon FGR4 made from a Revell kit. Peter's comment is "a nice kit but complex assembly"  The underneath shows a plane that is fully loaded with ordnance. I think that he said that there were as many parts in the ordnance as there was in the plane, itself! 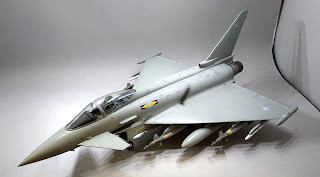 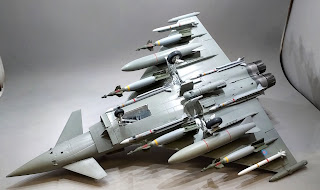 His second model was a Kinetic F-35B Lightning in RAF colours(?) It appears that every F-35 out there is painted the same. Even the Israelis haven't changed the colours! Peter's comment here is similar to the previous kit - "Nice kit but complex assembly and paint. Fit three times and glue once."

Peter is still coming uo with interesting bf109 models. This one is from a KP kit and represents an Israeli "Mule", so called because they were put together in Czechoslovakia, after the war, from whatever bits they had left in the factory. This one represents one of those sent to Israel, in defiance of an arms embargo, in 1948 for use in their war with Egypt. This model represents the first arrival and has a lot of signatures scribbled all over it. Click on the image and enlarge it to see the details. 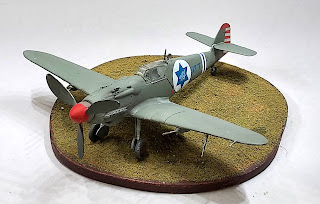 Peter's second model is an old favourite - an Airfix 1:72nd Feiseler Storch. I don't think that Peter was impressed with the kit as it has been re-issued as an "Airfix Vintage Classic". I got the impression that "vintage" was the right word for it! It is presented as one from the Afrika Corps and having, what is know as, scribble camouflage. 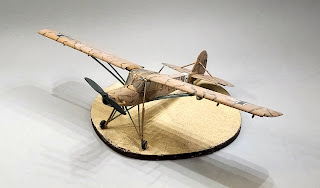 Bill brought along an Airfix (my how this make is popular!) 1:72nd scale Arado Ar.196 A-2 as used on the Bismarck. There was quite a discussion regarding the Bismarck and about how these planes were used, how one was due to fly off taking all the secret stuff with it but was eventually pushed over the side. I think that Bill had some issues with the struts to the floats but even so, he has made a really good job of what is a small and complex little kit. 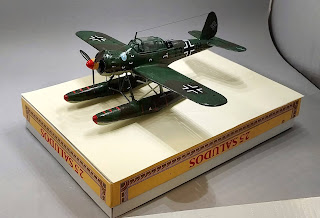 All in all, it was a good meeting with lots of conversation and interesting facts exchanged, as usual.  I am sorry about problems with the club web site, which I will resolve - eventually, as Manuel from Fawlty Towers would say. In the meantime, enjoy the images and the video presented here and don't forget to click on them to see them in all their detailed glory.