It's our Christmas meeting but without the mince pies

Well, we normally get together with everyone brining some goodies to eat. Not this year. We all had to stay at home. However, the proceedings were lightened by a small competition (of which more later).

There were only four contributors to the table this month. First up, though, is our featured model, which, again, has to be on of mine as I don't have access to other's models.

This model is one of mine. It was an "interesting" build for a few reasons. First off, the main details are as follows: a Hobby 2000 kit (which means ex-Hasegawa) but with their own decals. Given my recent showing of my trip to the USS Intrepid, I chose this because one set of decals was for the Valions on that boat. 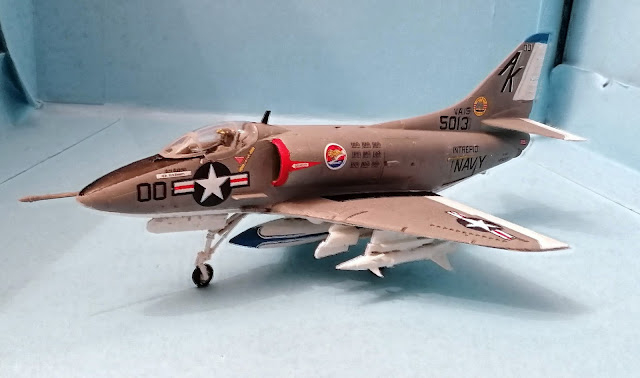 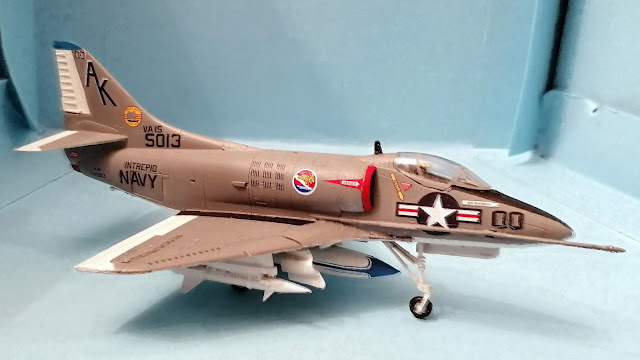 Overall, the kit went together very easily and I was most impressed with the fit - not quite Tamiya click and stay but close. The only trouble I had was with a couple of parts that go in under the air intakes. I couldn't see how these would fit, no matter which way round I tried them, so I just cut them a bit and slid them in. Now, what went wrong? I managed to move the upper wing decal after I had applied MicroSol and the decal, of course, just disintegrated. Fortunately, Hannants Xtradecal have a sheet of exactly this aircraft so I was able to recover. Along the way, I found two fairly serious errors, one of which was recoverable. The recoverable one was that I had put the Valions logo on facing backwards. As there was a version on the Xtradecal sheet, that was easily solved. The non-recoverable error was the paint job. When halfway through, I thought that I had made a mistake in using "Dark Compass Grey" instead of "Dark Ghost Grey". In fact, the error was bigger than that as I should have been using "Light Ghost Grey". Never mind. It is done and looks ok.

Next up was Peter Terry who sent me a text saying "Please find attached my contribution for the December blog. The Airfix SAM Missile kit now long out of production the mould tool now long lost Airfix do not know what happened to it so although a rarity i made it for the enjoyment completed as a North Viet Nam missile battery at the height " 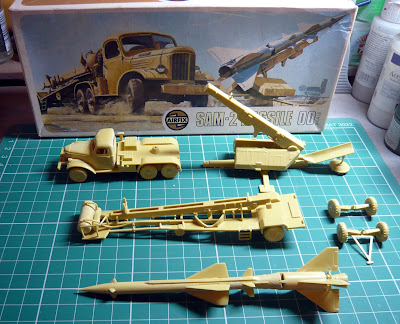 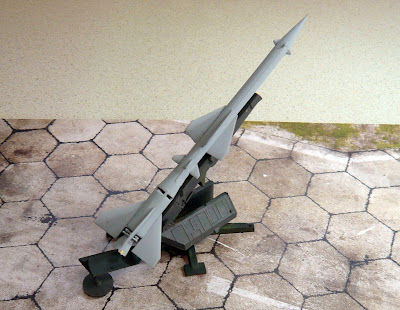 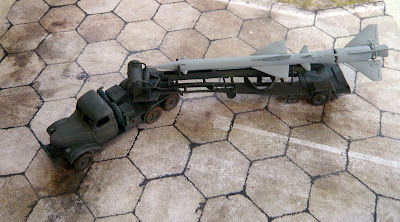 John Ovenden sent in his contributions as follows: " here is my input for virtual club table
all 1/35
Tamya Archer self propelled gun and crew on a Great North roads diorama
base (street corner) and an Airfix / Academy Hetzer tank destroyer early version on the same base.
Both easy builds with few problems. 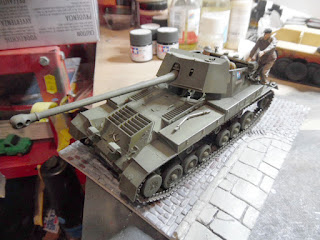 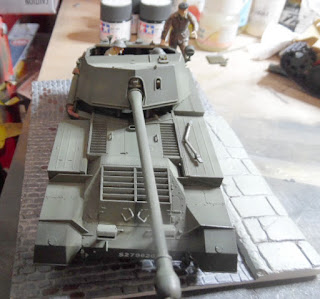 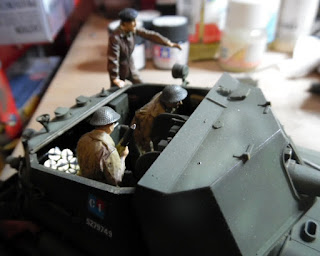 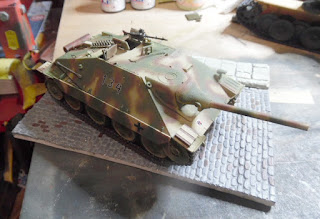 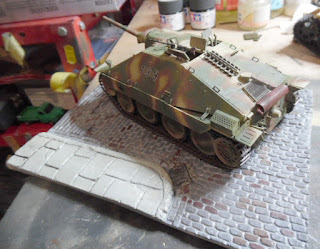 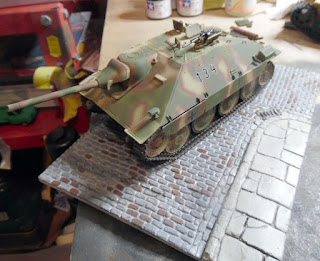 Last, John Rose sent in a couple of "work in progress" builds as, I think, he has been away for much of the previous month. His contributions are, in his words:
"Image 1. 1/35th Sherman m32 recovery vehicle.  I wanted an M32  that was a bit different,  so I took an Italeri one and, using references online, modified with sheet styrene and odds and ends from the spares box.  Still a WIP and will end as a late war USMC version.
Image 2. OOB Tamiya 1/20th Ferrari 312. Just needs seat belts and decals.
On the bench - x2 Shermans used in the Trinity test area. To be continued...." 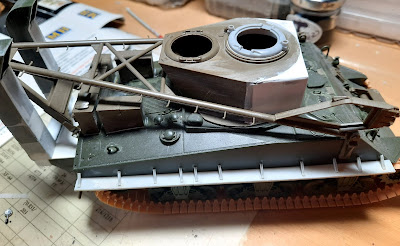 We had 10 votes for the various contributors. Up until late, it was looking difficult with three entries all with two votes but then a final, casting, vote came in leaving John Ovenden as the winner. He sent me the following:
"What a nice surprise. Please pass on my thanks to those who voted for me

Merry Christmas to all

I have an apology to make regarding the club web site - well two in fact. Firstly, some web browsers are starting to try and block web sites that don't use the super secure "HTTPS". This was originally created for securing credit card transactions as the S in the title means that all data being exchanged is encrypted. It also means that the owner of the site has been verified.

However, so browsers are now extending this to every site on the spurious notion that every owner has to be verified. We have no need for verification as there is no two-way interaction involced in browsing club information, I see no need to involve the club in extra costs and no need for me to spend the extra time setting this up, which (as I have done this before for my shop web site)  can be an extended process. Most browsers allow you to override the block. If you have any difficulties, please contact me with the details and I will try and help.

Secondly, I build the website using a programming system called "Seaside". This is an addition to my normal programming environment. However, there is a bit of an issue in that the site freezes up around every 24 hours or so. I am in the process of trying to resolve this with my environment providers but, at the moment, I am unable to ensure that the site runs continuously. I do go in and restart it as often as I can think of it but there may be times when you can't access the site. If this is so, then please just try a few hours later.

You should have heard from Peter but, if not, here is what he said.

I have had it confirmed that we can restart meetings as from the 7th of January at the Brotherhood Hall i will advise all member's if there is any change to this situation that you will need to know about. Please stay safe and have a good Christmas.

So, it looks like we will all be back together again, assuming that the tiers don't change. Looking forward to seeing you all again.