Quite a sparse meeting this month, in terms of models on the table. Even John Rose only brought three! Still one of them was a beauty. More details later but here it is as the featured model.

Peter ran through the arrangements for the up and coming Telford Show. David then described the new Search facility on the club web site. After that we got down to the main event - models on the table. 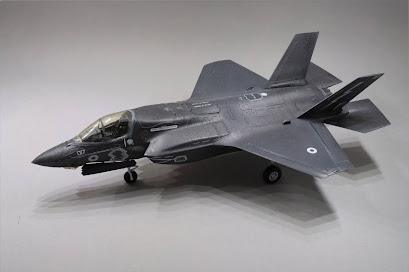 David admitted that he hadn't tried to add all of the patterns on the original aircraft. He tried painting them but it got so messy that he decided to leave them all off.
David's second model was a work in progress (W.I.P). He has already had one go at making the Hasegawa Lockheed S3-A Viking but gave up on it when he realised that the jet nacelles would block any attempt at painting the body. This time, he has wisely decided to leave them off until the bulk of the work is finished. However, he is finding the huge number of decals to be daunting. Watch this space. 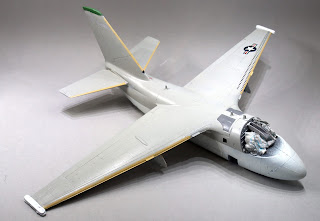 Bill is in the process of building a Revell Dassault Rafale B 2 seater. He reports that it is going together very well. 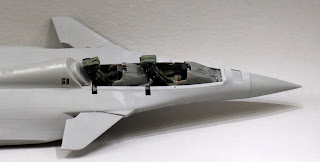 John brought along three variants on a theme - Sherman M4 A3. The first was an Academy kit which is very much W.I.P. with a lot of scratch building going on. I didn't record what the final target was so we will have to wait for another day. 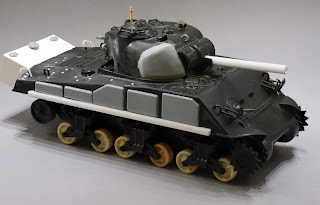 His second showing is another W.I.P. but this time it is an M4 A3 E8 from a Tamiya kit. As usual, it is going together very nicely. 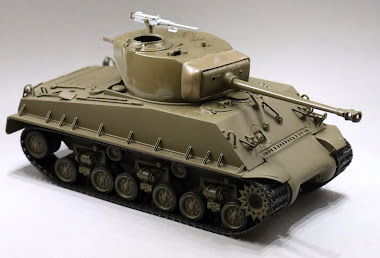 Lastly, he showed us a completed Italeri M4 A3 E8 which he compared to the Tamiya version above. This kit cost around 30% less than the Tamiya kit. It is modelled on the "star" of the 2014 film "Fury". He pointed out what a bargain the kit is because it went together nicely and, in comparison to the basic version supplied by Tamiya, it includes lots of stowage, hawsers etc. to make the kit look like that one in the film. 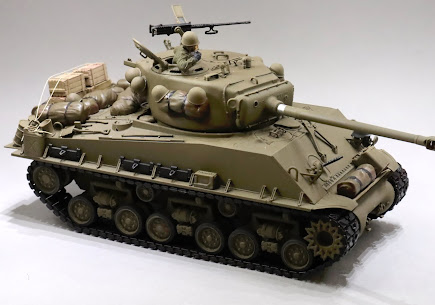 Peter showed us two beautifully finished 1/48th scale models. The first was a Hasegawa Dassault Mirage 2000 in Taiwan (ROC) colours.  Peter's comment was that it was a nice kit, with good decals, which required little filler. 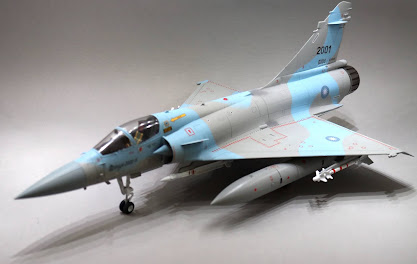 The second was an amazing Academy MiG-29. Quite how Peter has the patience to mask and paint the camouflage on this one is beyond me. Again, he reports that it was a nice kit with good decals. It required very little filler but it did need 3 weeks of masking and painting with over 250 individual pieces of masking tape!

Peter brought one of his favourite AZ 1/72nd scale model kits - this time a Curtiss P-40 Kittyhawk in early was USAAF colours - before the red inner dot was disposed of.  This one is built out of the box! 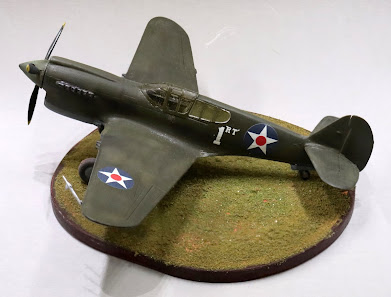 That's it for this month. Don't forget that you can click on any of the images to very a larger version. That is why I take the trouble with my cameras! Mind you, given that I had a lot of trouble messing about with my new Canon 90D trying out the connection to my phone, I am pleased that we have any photos at all. Next month, I will have it cracked. Watch this space.
Lastly, don't forget the next social evening on the 25th November. Bring along a kit to build or just bring yourself and "JawJaw" all evening.
at November 08, 2021 No comments: