Well, we were making plans for 6 in a room with two rooms  but, in the end, it turned out that we could all meet in the usual room. There were only 8 of us for a quiet night.

Let's start with my feature video - this time it is one of  Peter's Starfighters.

(Use the [] full screen option)
Crispen was here with his usual eclectic choice of kits. This time, he had an RB Models Stuart M5A1 Late boxing to show us all. This is a 1/16th scale model so, as usual, Crispen is going for it - LARGE! - grin. We only have the box top for now. 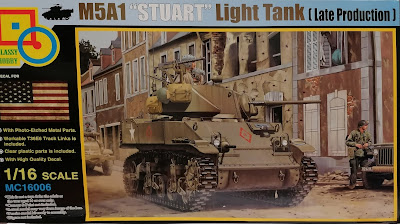 Nearly everyone that had a model brought two along (except Bill who talked about the second one:-) so Crispen's second helping was a WIP Meng 1/9th scale Kawasaki Ninja H2R. This is a snap together, pre-painted kit which, according to Crispen, goes together very nicely. 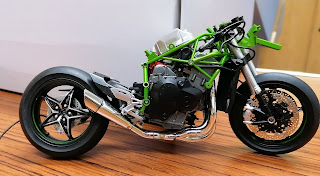 Bill Banks has completed his Harrier GR3 in 1/48th scale.

His next target is an AIG Scammell Pioneer SV/2S in 1/72nd scale. This is one of Airfix's legacy kits so could be fun!
Peter Carlo brought along two 1/48th scale aircraft - a Kittyhawk Sukhoi 17/22, which was nicknamed "Jelly Legs" and a Revell BAe Tornado F3.

The Sukhoi fuselage is comprised of 6 pieces - no doubt to allow other versions - but with some care Peter got it all to fit very nicely. It also had a complete engine which is now in the 'I can't see it but I know it is there' category. The undercarriage is very finely moulded but see the following video for the effect of this and why it got its nickname.
Peter's other model was a more conventional Revell build.

John Ovenden brought along a major work which started of easy but ended up a major task. He purchased a kit of a Russian truck being pushed by some troops. Seeing this and wondering what to do with it, he got hold of a Russian horse drawn gun with support team and put together a lovely diorama showing the oft-times forgotten benefit of horse-drawn when the going gets muddy! 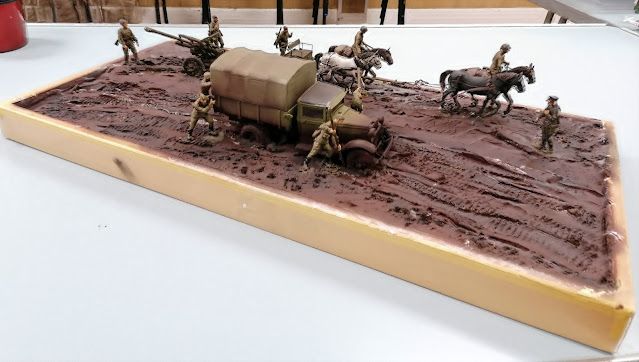 Peter Terry treated us to yet another of his splendid collection of F104-G Starfighters. This one is a 1/72nd scale Revell boxing. Peter has made this as a Canadian AF aircraft by using some 40 year old decals.

He also brought along an Airfix 1/72nd scale North American B-25-2 Mitchell in RAF colours. He has used a standard Olive Drab overlaid with touches of faded Olive Drab and then some pastels to get a nice weathered effect. 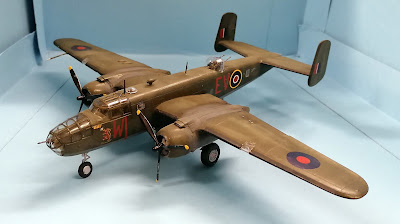 I am a bit concerned about Colin as this is the 2nd month when has not brought a model. We are looking forward to the next interesting plane from your stable, Colin!
Lastly, then, are my two contributions - one was the only figurine on the table just for once!
The figurine is a Nuts Planet 1/12th but of yet another Japanese fictitious Ninja Troll. This is Onibi. She has a copper skin and a flame on the end of one arm! 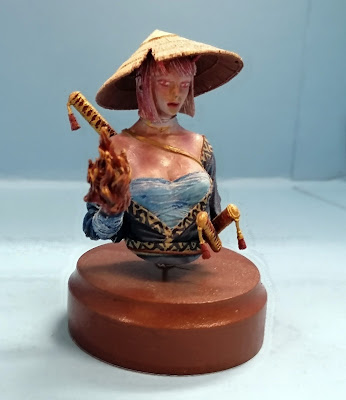 My second item was an Eduard 1/48th scale Hawker Tempest Vb Series2. This would have been a great model to make if Eduard hadn't over engineered everything - using 5 parts where one would do. I had to do a major reconstruction of the cockpit as some of the structural parts were so thin that they broke very easily. I also managed to break the tail wheel off so I had to re-drill the hole - leave the plane sitting a bit low at the back. However, I was very pleased with it. BTW, I did NOT use all the tiny warning, etc. decals as there isn't enough time left in my life for activities such as that- grin. 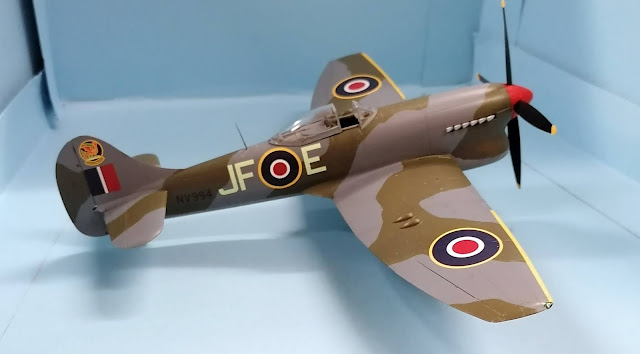 That's about it for this month. Next month looks a bit suspect due to further lockdowns but here is hoping that we can all get together as usual.
David Pennington
Webmaster
at October 16, 2020 No comments: