Quite a small turnout this month but a couple of interesting items on the agenda.

Colin suffered some ill health in the last month and, whilst he is recovered, feels that it is time for him to stand down as Treasurer. It seems that he has been in the role since 1996 which is quite long enough for anyone! Hence, it seems that we are looking for someone to volunteer to take the role on from December this year. Any takers? If so, please email the Chairman.

Peter also announced that it could be a good idea if there were to be two meetings each month - on the first and third Thursdays respectively. This was put out to the members for some thought with more consideration at the next meeting. The second meeting would be an informal one so, for instance, no "going round the table" but time spent chatting and, perhaps, doing some modelling.

Firstly, I like to feature one model each month and video it on the mirror turntable. This isn't a "First place" selection, just a random model from the evenings contributions. This month, it is the turn of Bill Banks and his nice little Airfix Auster AOP.9.

Here is another little innovation. I have put all of the photos into a slideshow (with cheesy music!). What do you think?

OK, now to each member's models.

Bill brought along an Airfix Auster AOP.9. Bill had a story to tell about when he was in the Royal Artillery, when he was younger (grin). The Brigadier had them all go to a tiny little clearing on Luneberg Heath in northern Germany. Next this that Bill knew was that this tiny little Auster flew in and landed in about 60 feet. Very impressive, says Bill. Anyway, he decided that this was worth of a model. However, he was unable to find out anything about the plane, even after going to the RA museum and the International Auster Club so he stayed with the kit decals. 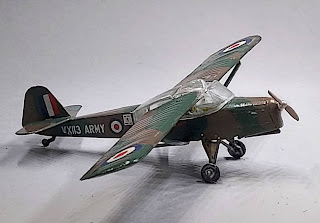 He was disappointed that the structural bars across the top of the cabin were missing from the kit (never moulded rather than lost), especially as they are shown on the box art.

David brought along a Sword Fairey Gannet AEW.3. He had some difficulties with this short run kit but the final effect wasn't all that bad, so long as you don't get too close of course. He used to have a CzechMaster resin resin version that was decked up for a plane that his friend from the Air Scouts used to fly off HMS Eagle. Unfortunately, AlleyCat no longer list these decals and they didn't answer his e-mail so the model represents one flying off HMS Hermes in1968. 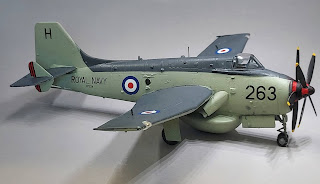 John, as usual, brought along a very nice diorama. This time,  we have a desert scene comprising of an Airfix/Academy 1/35th scale Lee/Grant sat on a diorama base made out of styrofoam covered in silver sand and painted with Tamiya paints. The crew are from Gecko. He says "It was a good model to make and fitted well. The tank crew are posed as having a tea break in the wadi!" 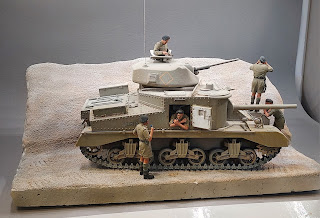 As usual, John brought along a box of models, plus his partner! The box contained some goodies that he  told me not to photograph as they were very much W.I.P. and "Fantasy". They were two Shermans that were being built to represent those used during nuclear bomb testing to ascertain damage. Anyway, there were four other excellent models which I did photo.

First up is a PzKfw III in Africa Korps colours. This is a Tamiya 1/35th scale kit. 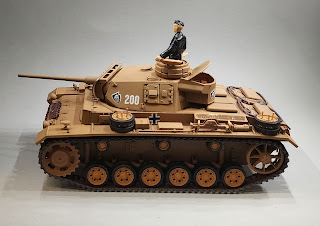 Next is a US Marines M4A2 recovery tank which I think is Tamiya with scratch-built exhaust stacks. 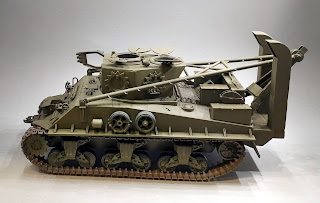 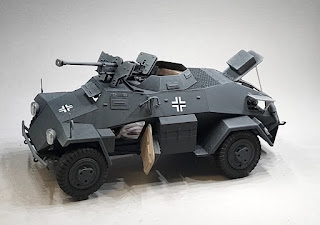 Lastly, there was an SdKfz 232 radio/recce 8 wheeled armoured car, again from Tamiya 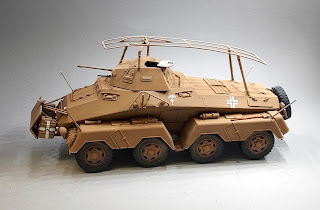 Peter likes to give us some larger than life models and this month he brought along three for us to look at. The first was a Takon 1/35th scale Polish A.P.C. 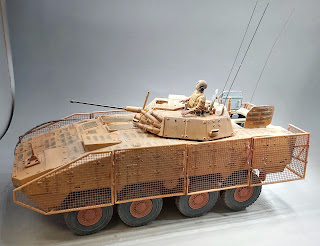 This had a nice interior. 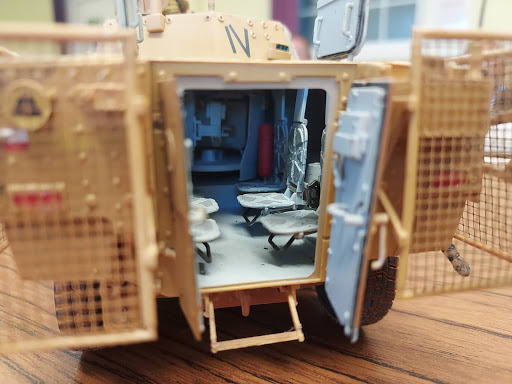 Next was an SS23 Spider Launcher from Hobby Boss. This exceeded the limits of my photo booth! This vehicle was a victim of the SALT treaties so never made it in deployment. 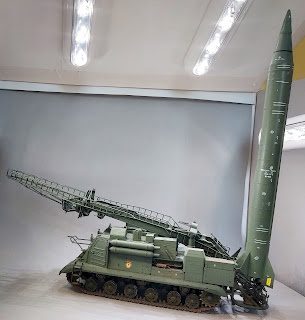 Peter had a supply of thin rubber hose so fitted out the business end of the rocket as best as he could, which I think was excellent! 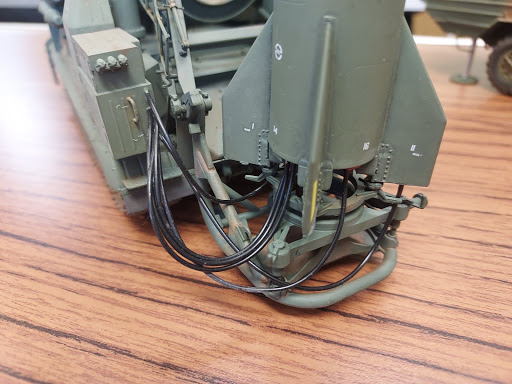 Lastly, he brought along his model of  a Russian SCUD launcher (which we had seen before) but it fitted the theme nicely. Where does he keep all these? 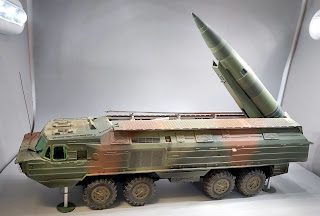 Lastly, it appears that Peter is still on his mission to model every bf109 that flew! Here are two more - this time bf109F marks. They are both AZ kits and Peter comments that "the build was sustained with lots of coffee!". The first one in "scribble" camouflage from Finland in 1942. 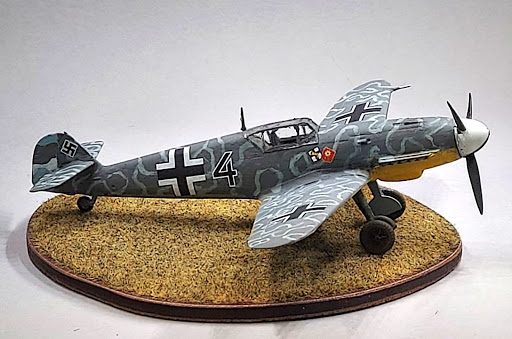 The second one is from the Russian front, again in 1942. 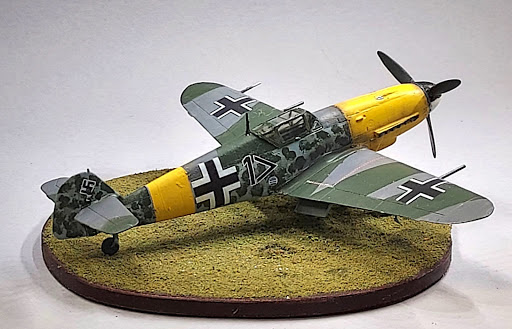 Well, it was a good, if small meeting. It is nice to see Bill's son David becoming a regular for now. Also,  it would be good if I could remember to bring some cash to pay my dues - cash, I seem to remember that from the distant past! Honestly, Colin, I will catch up. Don't forget to think about the Treasurer role and the extra monthly night!