Well, we are still stuck but, after all the excitement of the Work Space competition (!!)  we are back to our regular meeting venue - our keyboards and screens. Still, it look possible that the May meeting could be face to face or, at least, mask to mask. Let's hope. Anyway, here we go for this month's table.

Bill Banks always provides lots of information about his models and this time he has sent us details of his build of a Matchbox Curtiss Helldiver. 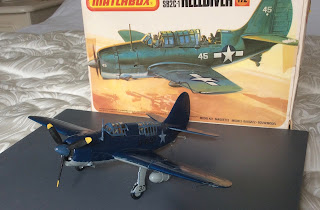 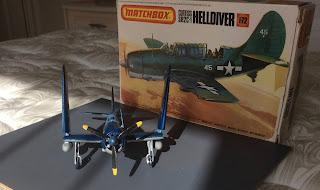 Curtis Helldiver SB2C Matchbox kit 1.72 US Navy Divebomber Squadron VB 17 USS Bunker Hill July 1943.
Replaced the Dauntless in Us Navy Service. A heavy aircraft..over 7 tons...had difficult handling characteristics. Rejected by RAF...28 aircraft...never used in combat.Also rejected by Australian Air Force. A scathing report on the Helldiver production meant the end of aircraft production by Curtis. Despite difficulties the aircraft flew to the end of the Pacific War with high combat record. Many pilots grew to like it.

The box art shows open bomb doors. It would have looked good on the kit.It went together well with no problems. Moulded in self colour but I sprayed in the darkest blue I had.

Curtis still exists as Curtis Wright manufacturing aircraft parts and military items.Based in USA and Uk with several associated companies."
Next up is my
Douglas Dauntless SBD-5 - 'Slow But Deadly' 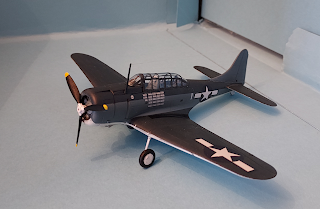 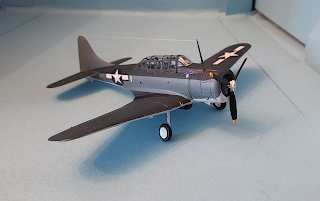 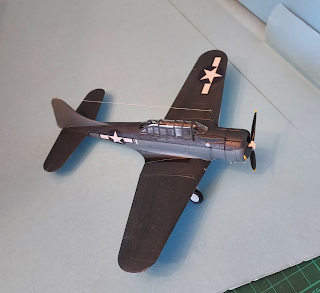 "This is Hobby 2000 (ex Hasigawa) 1/72nd scale kit. Like all Hasegawa kits, it goes together nicely. The decals provided went on very well.  I made this kit having made an Accurate Miniatures version back in the day with fond memories plus I have recently watched the film Midway, where the SBD is definitely the star of the show. I have just noticed that I haven't fitted the landing hook!"
John Ovenden has sent us some shots of a German WWII lorry that he is building. He didn't provide any details but I assume that it is the
ICM 1/35th scale model. 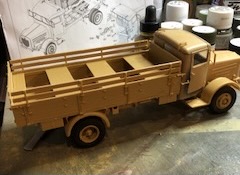 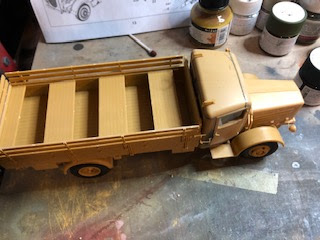 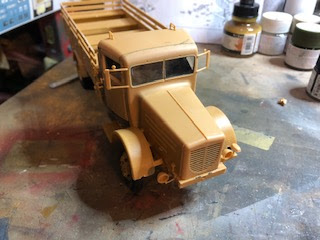 A work in progress so we expect to see the finished item soon.
Another w.i.p. but 99% finished, according to John Rose.  He says "Tried to clear desk of part/nearly done kits and the gods conspire to thwart me yet again!" This is his
Tamiya 1/3th scale PzKfpwIII 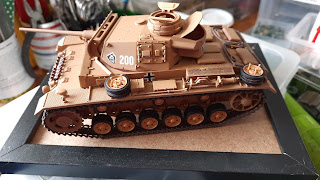 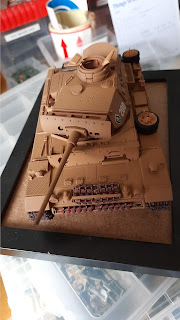 Jim Smetherham has a tale to tell about his building of an
AFVClub M42 Duster
For the gory details, check out his "Member's Article" on the club web site. 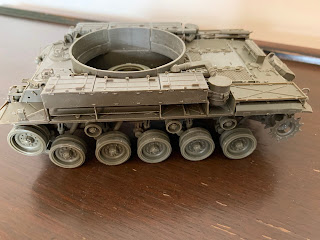 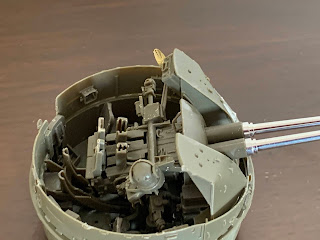 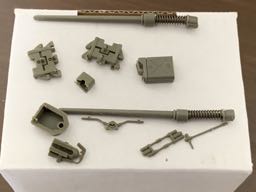 Peter Carlo send in details of two of his recently completed models.
First up is
A Kittyhawk kit of the
FJ2 North American Fury 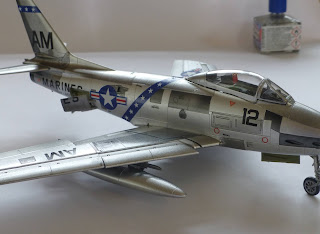 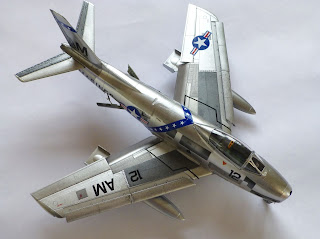 "The kit is typical Kittyhawk needing very careful fitting, scrape apart from mating surfaces glue in short sections while holding with tape. Again recessed panel lines aid painting for natural metal finish in essence darker panels are generally stronger or more heat resistant.
The aircraft had a short operational life due to being over weight because of modifications to fit it for the naval role which left it under powered, only carrying 20mm cannon as armament.

This is a very pleasant kit to build but you need to take your time and to quote--- fit twice fit twice more then glue ! There is very little filler needed just care and patience."
Peter's second offering is
Lockheed Starfire F-94 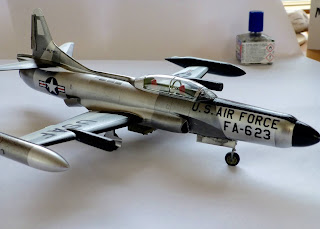 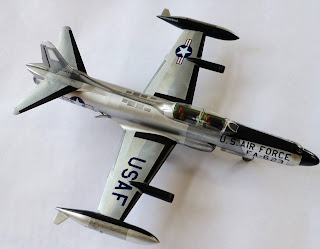 "The starfire is a Kittyhawk kit. It goes together very well with next to no filler but does need careful fitting before applying glue. Panel lines are recessed which helps with masking as this takes as long as you have patience and/or time for but the results are worth it. The aircraft was the first US all missile interceptor. The missiles/ rockets mounted in the nose and the two mid wing pods this  turned out to not be very reliable but was all that was available at the time."
Lastly, we have two contributions from Peter Terry.
"This month I have another
Airfix Spitfire Vc. in 1/72nd scale
This time in Australian markings from a training squadron in 1943. I got further information on camouflage for the foliage green colour from Brett Green of Hyperscale ." 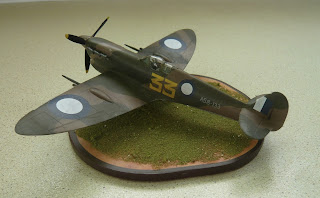 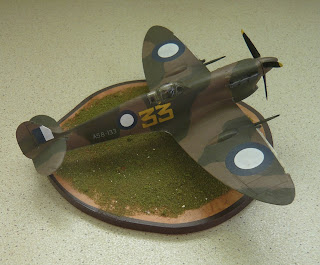 The second kit this month is the
AZ Bf109e
from the North African boxing. 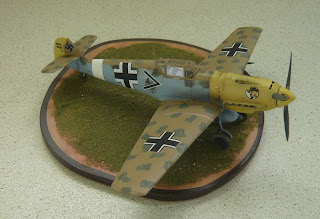 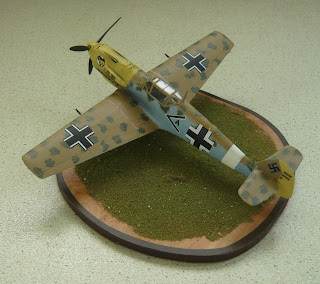 Can I remind you that you can double click on any image to see a larger version for more details. If you do this then click on the X in the top right hand corner to return to the blog.

This has been up and down over the last few months and I have finally resolved to do something about it. Gloss over this if you are "techie phobic". I decided to move from my normal platform to a Smalltalk called Pharo. Within this, a service called  "Seaside" helps me build and run the web pages. It has taken some time to get to grips with the change in the environment but I think that I am pretty much there. All that needs to be done now is to move the development over to the 24/7/365 web server running under my desk. I expect to get this done on the next few days. Hopefully, the web site should then run without a hitch.

Important news from Peter regarding the return to face-to-face meetings. The first meeting in May is delayed so read this carefully:

Please note the following shows have also been booked,

Sunday the 25th of July.

Sunday The 26th of September .

Saturday and Sunday 13th and 14th of November.

Just to remind you that all of the shows that Peter has booked are listed on the website should you need reminding of dates or locations.

That's all for this month. See you all soon!