Well, a good few (9) people but not too many models (7). Peter started off by confirming that the Brampton and Telford shows were definitely going ahead but warned that if you are going, it would be good to have a vaccine passport, which you can get on line from the NHS COVID Pass Letter page.

First up, there is a short video where I feature one of the models on the table. This not to be taken as "best on table" as the club doesn't hold competitions at the monthly meeting. It is taken purely because it is an interesting model. This time, it is John Ovenden's take on a medic-jeep using an Italeri kit as the base.

Right, on with the table.

Bill showed us the instructions to his current kit - an original Airfix 1:72nd scale Me163 Komit rocket fighter. He spent some time getting clear instructions regarding the camouflage but didn't get any absolute answer. He gave us a potted history of the aircraft. He kept the model at home so all I have is some images of the instructions. Bill does seem to go out of his way to tackle difficult topics! 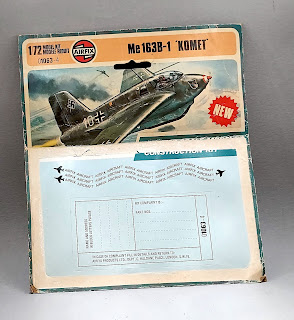 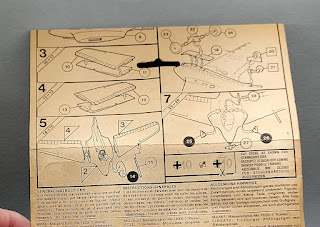 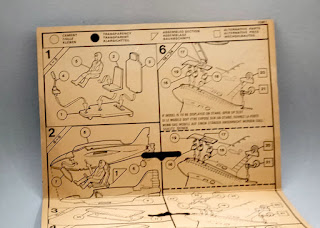 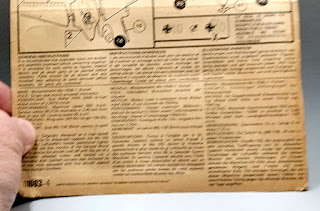 Peter brought along a couple of 1:72nd scale P-40 Kittyhawks. Both are from the Desert campaign. The first is an R.A.F. version in South African service. This is an AZ kit and made out of the box with some pastel shading. 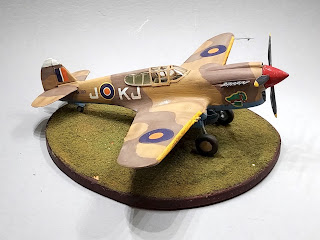 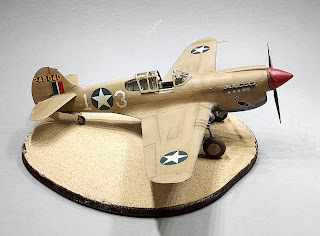 John brought along a nice little Willys Jeep from an Italeri kit in 1:35th. He has converted it into a medic stretcher carrier using a MiniArt US Army driver. 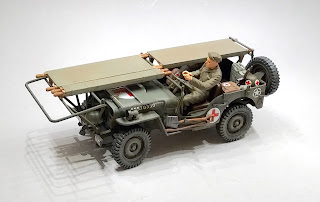 Peter brought along three propellor driven aircraft for a change. His first model was an Airfix 1:48th scale Hawker Sea Fury. "It is a nice kit with little filler ", he says. 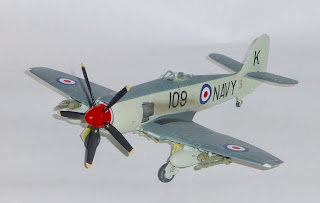 Next was a Trumpeter 1:48th scale Westland Wyvern. Peter says " It is a nice kit with little filler but quite complex to build" 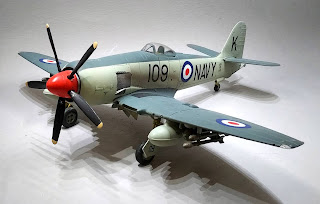 Lastly, Peter showed us a Tamiya 1:48th scale Douglas Skyraider in US Navy markings.  His comment was "Typical Tamiya, next to no filler and good decals." 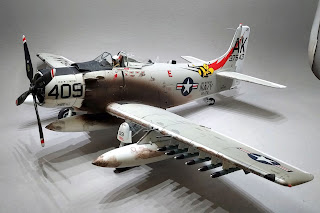 The underneath was quite special. 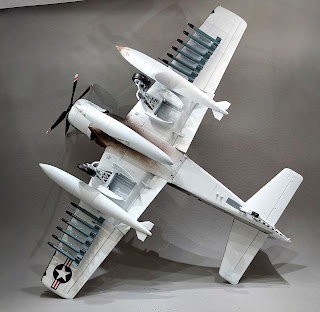 I brought along my finished Tamiya 1:48th Lockheed P-38 G Lightning. This is one of their recent kits and is, I would say, extra special. It even comes with three ball bearings - one in the nose and one in each boom. Needless to say, these are "just" good enough to stop it being a tail sitter. It is quire a couple kit but so long as you keep remembering "Tamiya" then everything will fit - eventually. I had trouble with the canopies and ended up using the open one. I ruined the No Step decal on one side of a canopy so had to buy a replacement set of P-38 stencils to get a full set of four again! 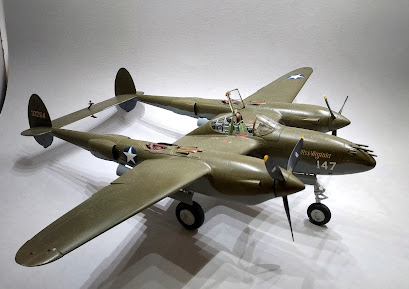 The cockpit was particularly good in both construction and paint callouts so, for once, I have a decent one to show. 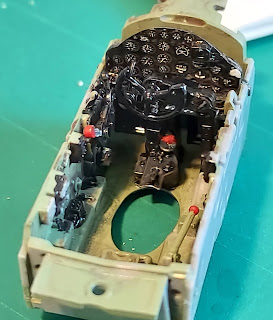 So that was all the table.  I still haven't sorted out the problems with the club web site so the blog remains the only presence. It will be fixed but...
Next month is the start of the two meetings months so we are all looking forward to that.

You can click on any photo to get a much larger version and then just use then back arrow in the browser to get back to the blog.
at September 08, 2021 No comments: